For Israelis, May 1948 marks the creation of the State of Israel. For Palestinians, it marks the Nakba (‘catastrophe’): more than 700.000 Palestinians were forced out of their homes. Today – exactly 70 years later – those 700.000 have exceeded six million. 48 Stories presents the personal stories of Palestinians who witnessed the events and shows where they live today.

48 Stories was produced by photography collective NOOR, Palestinian and other photographers from the Middle East, designers Kummer & Herrman and Paradox. 48 Stories sheds new light on the representation of the Palestinian diaspora. The project documents the memories and everyday lives of Palestinians, both 1948 survivors and their descendants. Many of them live in Gaza, the West Bank or Israel but the vast majority is spread around the world; they are based in (former) refugee camps in Lebanon, Syria or Jordan, have settled in countries like the US, Chile and the Netherlands. They have become shop owners, doctors, political activists or university professors. While they are scattered geographically, they share the hope of one day acquiring the right of return. However, being rooted in new homelands and without any sign of reconciliation of the Israeli-Palestinian conflict, it is unlikely that they will ever resettle.

Between 2016 and 2018, 7 photographers and filmmakers captured the experiences of Palestinians across the globe. 48 Stories shows a community whose members, although geographically and socioeconomically diverse, are all tied to the same country, landscape and history.

48 Stories presents the personal stories of Palestinians in an innovative web app, based on Slices, an Amsterdam start-up developing online storytelling solutions for journalists. 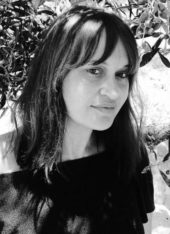 Tanya Habjouqa (JO, b. 1975) is an award-winning photographer, journalist and educator with a background in journalism and anthropology. Her practice links social documentary, collaborative portraiture and participant observation. Her principal interests include gender, representations of otherness, dispossession and human rights, with a particular concern for ever-shifting sociopolitical dynamics in the Middle East. Habjouqa’s work has been exhibited worldwide and is in the collections of MFA Boston, Institut du Monde Arab, and the Carnegie Museum of Art. She is a founding member of Rawiya, the first all-female photography collective from the Middle East. She is a mentor on the Arab Documentary Photography Program, organised by Magnum Foundation, Prince Claus Fund, and AFAC. In 2017 she joined photography collective NOOR. 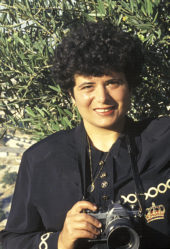 Rula Halawani (b. 1964) was born and raised in Jerusalem. She has a BA in Photography from the University of Saskatchewan, Canada (1989) and a MA in Photographic Studies from the University of Westminster, London (2001). She established the photography programme at the University of Birzeit, Palestine. Having grown up in occupied East Jerusalem, Halawani’s work demonstrates a strong relationship between art and politics. She has had solo exhibitions in London (2010), at the Suha Shoman Foundation, Darat Al-Funun in Amman, Jordan (2006), in Palestine (2003 and 2004) and at the City Museum in Rome (2002). She has also taken part in group exhibitions, notably at the Institut du Monde Arabe in Paris (2009), the 6th and 7th Sharjah Biennial in the United Arab Emirates (2003 and 2005) and the Busan Biennial in South Korea (2004).

Ali Noureldine (PS, b. 1985) was born in Gaza and currently lives in Berlin. At the age of 17 he started working as a freelance photographer for the European Press Agency (EPA), reporting on news and events in Gaza. He earned a degree in journalism from the Azhar University in Gaza. In 2012, during the eight-day war, his family home was shelled and his father and sister were injured while he was photographing the events. In 2013, he was selected for the Joop Swart Masterclass organised annually by the World Press Photo Foundation in Amsterdam. Also in 2013, he received the first prize from the British Frontline Club and the Days Japan Photojournalism Award.

From Gaza, Palestine, Ezz Al Zanoon (PS, b. 1992) is an independent photo journalist and filmmaker whose work regularly appears on the Middle East Eye, The Electronic Intifada, and Al Jazeera English, among others. His work is mostly concerned with topics such as human rights and social justice. In 2017, his work was included in the group exhibition HOME at Framer Framed in Amsterdam.

Sarka Vancurova (CS, b. 1985) is a Czech independent photographer currently residing in The Netherlands. She has a BA in Photography and Design (Academy of Arts, Utrecht) and an MA in Photography (AKV St. Joost, Breda). Her documentary work is focused on fighting social injustice and giving a voice to people living on the edge of mainstream society. Her main subjects are often children or teenagers, documenting the consequences of war and poverty around the world.

Yasmine Omari (Haifa, b. 1988) is a Palestinian-American photographer and active arts administrator devoted to serving the community through cultural and fine arts. She is a Salzburg Global Seminar for Young Cultural Innovators 2017 fellow. Her photography work is largely influenced by a wide array of filmmakers, artists and writers such as Andrei Tarkovsky, Yasujirō Ozu, Béla Tarr, Jan Švankmajer, Gao Xingjian, Sebastião Salgado, Mahmoud Darwish and W. S. Merwin. Yasmine Omari’s photographs often show contemplative isolation and longing within the frame of personal memory and place.

In Juni 2018, 48 Stories was presented as a pop-up exhibition at Cinema Galeries. The multi-vocal character of the project was reflected in the use of multiple projections. Located in the heart of Brussel, Cinema Galeries offers a wide program of exhibitions dedicated to independent cinema and contemporary art.

48 Stories presents the personal stories of Palestinians in an innovative web app. The app is designed by Kummer & Herrman and created in collaboration with Slices, an Amsterdam based start-up developing online storytelling solutions for journalists. Each episode zooms in on the memories and everyday life of a Palestinian, who witnessed the events of 1948.

48 Stories connects the experiences of Palestinians who resettled around the world, but all share ties to the same country, landscape and history. The app allows for a re-reading of the Palestinian diaspora and opens up to new stories and interpretations.

Follow the stories on 48stories.org. Every two weeks a new episode will be added to this free web app.

48 Stories is a collaboration between NOOR, Palestinian and other photographers based in the Middle East, Kummer & Herrman, Slices and Paradox.