Why do people migrate? Where to and for what reasons? What is the fate of the different indigenous populations in the Americas? In Via PanAm, Kadir van Lohuizen investigates the roots of migration in the Americas, a phenomenon which is as old as humanity but is increasingly portrayed as a new threat to the Western world.

Via PanAm follows Van Lohuizen’s footsteps from Tierra del Fuego in southern Chile to Prudhoe Bay, northern Alaska. Travelling almost 40,000 km along the Pan-American Highway and crossing through 15 countries, Van Lohuizen visualized the stories of the communities, regions and societies he encountered. His work reflects a diverse range of migration experiences both historic and contemporary.

Although migration is as old as humanity, many people in Europe and the USA see it as a threat and a new phenomenon. Yet, the Americas are continents shaped by colonialism and migration. The indigenous population has been either extinguished or sidetracked. People are mainly of European (or African) descent. Bolivia is the exception with an indigenous population that forms the majority. The country elected a native president, a novum in Latin America in 500 years.

People move all over the continent. Looking for work, a different life, a better life and fleeing because of conflict. Sometimes people cross a border for these, often they move to other regions in their own country. For this Kadir van Lohuizen will travel from Tierra del Fuego (Chile) to Alaska and will use the Pan-American Highway as a point of reference. In the end it is the road that people mainly use to move on in life.

While working on various subjects around the globe, Van Lohuizen found that migration often played a role in many issues and in many different forms, be it climate change, war and conflict or economical issues. As a photojournalist specialised in covering long-term projects, this inspired him to devote a project entirely to the subject of migration and to make a visual investigation of all its aspects.

The Americas in particular are interesting continents because of their long history of migration and the recent political developments in both South and North America. Whereas most people think of migration as people moving from South to North, most movement actually takes place between neighbouring countries and between different regions within a country. By investigating these movements and visualising them, Via PanAm wants to contribute to a better understanding of migration and the Americas.

The photo stories reflect the complexity of migration – the diverse motivations for coming and going, the struggles and successes, the economic, political, social and environmental contexts, as well as the intimate moments and personal stories – some touching upon current issues, some on topics long forgotten but not resolved.

Via PanAm was nominated for the Canon Zilveren Camera Award 2012 and 2013 and for the Dutch Doc Award 2013.

Additionally, support from the many backers on Emphas.is and IS Magazine has been vital to the realization of the project. 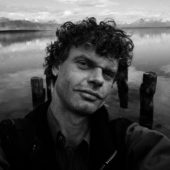 The Via PanAm exhibition is a combination of an audio-visual installation and a series of large prints plus iPads showing the app. Together they form a spatial environment in which multimedia photostories and road videos immerse the audience in the surroundings and stories of the project. The exhibition launched in Chile in January 2013, and travels to several venues in Europe and (Latin) America.

The publication, designed by Heijdens Karwei, takes the reader along through the changing landscapes of the countries travelled and zooms in on the lives of the people Van Lohuizen portrayed. Their stories show their strength and their vulnerability, the variety of motivations they have, the roads they travel and the (often informal) infrastructures they enter into.

The unique publication takes the reader along through the changing landscapes of the countries he travelled and zooms in on the lives of the people he encountered. The book also includes an essay by acclaimed Colombian writer Juan Gabriel Vásquez.

Via PanAm engages the audience through a variety of platforms, using both traditional and new media. The stories made on the road were edited into weekly radio broadcasts, biweekly newspaper columns and regular magazine publications. The Via PanAm website and iApp not only provide contextual background info, but also directly connected readers and viewers with the journey’s progress. Day by day, the Americas and their people revealed themselves to the photographer and his followers as photo-stories, video and audio were uploaded on a regular basis.

The Via PanAm iPad application follows Kadir’s footsteps during the trip. In addition to the blog and background texts that are also available on the project website, the app features Van Lohuizen’s extended visual reports containing images, audio and video. A rich and ongoing compilation of stories, the app takes a bold and innovative new-media approach to visual storytelling.

The app, which can be purchased in the App Store, is available in English, Dutch and Spanish.

Via PanAm is a project by Kadir van Lohuizen, NOOR Images and Paradox, in collaboration with VPRO radio and NRC Handelsblad.