In the 1990s Frank van der Salm aimed his lens at the landscape in order to record the human influence on it. Initially he followed in the tradition of the New Topographics, a movement that gained prevalence in the 1970s. Soon, however, he felt that the self-imposed restrictions – black and white, restricted format, the subject depicted sharply in focus and descriptively – was too limiting; Van der Salm started experimenting with colour, format, depth of field and scale. Until the mid-2000s the latter aspect was a distinguishing element of his visual language. The resulting alienation made the observer doubt whether this was an image or a scale model – an idealized model of reality, or an image of reality itself. In various guises, this has remained a characteristic of his work to this day. The central question always remains: which is the ideal image being pursued and what are the underlying values of it? Van der Salm himself indicates that his work – with the urban environment as its main subject matter – is a search for ‘who we are’. In other words: Frank van der Salm’s often impressive, aesthetic images are based on a critical cultural engagement.

We are currently living in a media society in which the image is omnipresent: experiences are guided by images we have seen before in the (social) media. In architecture this is taken a step further: buildings are increasingly designed (or cloned) with the eventual resulting image in mind. The traditional relationship between (physical) original and (digital) copy is reversed.

Exhibition at the Nederlands Fotomuseum
The main exhibition NOWHERE will be presented on the ground floor of the Nederlands Fotomuseum, the space divided in half by a 18x3m wall. While the front will feel like an open urban space, on a long facade an AI-driven montage of the work will be projected. Behind the wall, physical works will be on display.

In his PhD research at the University of Amsterdam, Gjorgji Strezoski (MK) studies the interpretative capacities of artificial intelligence. He co-developed a model fed with Van der Salm’s complete oeuvre and concepts that were relevant to him; they were all attributed with a high or low value. Based on subjective concepts like 24/7, environment or alienation and the values attributed to them, the computer will indicate objective relationships between the images. This will shed a new light on the works and their social relevance. The visualization of verbal concepts, the images, the values they represent and the underlying machine language was translated into a monumental 18x3m projection by RNDR – design studio for interactive media. The accompanying sound design was produced by composer Henry Vega (US).

Total images, crops, and details from Van der Salm’s work will be combined in a projection with a visual translation of the data, to make visible what happens inside the computer. The second part of the main exhibition is an extreme contrast to the urban environment and dynamic projection; ultimate white cubes with a restricted selection of physical works.

The Collection Illuminated by… Artificial Intelligence
For the last few years, the NFM has invited contemporary writers, photographers and curators to – from their specific perspective – curate exhibitions from the museum collection in The Collection Illuminated by…. In the context of NOWHERE the unique occasion presents itself to have an algorithm perform this task. The presentation includes an  interactive installation, driven by an  algorith trained by photographer Frank van der Salm

In the centre screen in this installation, we travel through his work on the basis of the terms. The screen on the left shows images from the Collection of the Nederlands Fotomuseum, while the screen on the right shows pictures from one of the fastest-growing image collections in the world: Instagram. More than 100 million photos are uploaded to the online platform each day. Of these, 41,000 can be seen here – a random selection from the countless billions now on Instagram.

The presentation with the computer as a descriptor of the images as well as a guest curator is a unique opportunity to address the phenomenon of AI for the general audience and encourage a debate amongst professionals working in the archive and museum world. Are we dealing with AI as a ‘helper’ of the artist or AI as the ultimate curator?

To visit NOWHERE , book your ticket via the website of the Nederlands Fotomuseum. 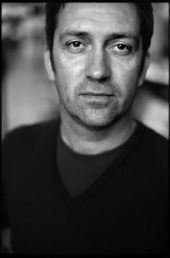 Frank van der Salm (b. 1964) studied at Delft Polytechnic and the Willem de Kooning Academy (Rotterdam). He has worked on projects with architects such as O.M.A. (Rem Koolhaas), Herzog & de Meuron, and MVRDV. His work has been shown at the Venice Biennial, Haunch of Venison (Zurich, Switzerland) and the Stedelijk Museum (Schiedam, Netherlands).

The installation developed for NOWHERE  is a collaboration between Frank van der Salm and Paradox. Winy Maas, founder of MVRDV, is a consultant on the spatial development of the installation. The radical design separates the venue into two equal spaces. One part shows – in a rotating schedule – a choice of original Van der Salm works under ultimate white-cube conditions. It emphasizes the physical nature of these works; their size, their surface. The selection will change two times during the exhibition: on 03 August and 07 September 2021.
The other part feels like an open urban space, with a 18 x 3m wall at its far end, showing a continuously changing projection of images by Van der Salm, while not taking their original size into account. Here the images are combined and recombined, cropped and blown up, based on an artificial intelligence algorithm, developed by Gjorgji Strezoski, AI researcher from the University of Amsterdam. Here, the computer acts as the tireless curator interpreting the oeuvre of Frank van der Salm.
On the second floor of the museum the presentation The Collection Illuminated by…Artificial Intelligence is on display, featuring an interactive installation. It shows images from the museum collection and social media in combination with Van der Salm’s work.

NOWHERE – Imagining The Global City collects Frank van der Salm’s work of the past 25 years. The image of a consumer-oriented, imaginary metropolis rises from this book, designed by Irma Boom. Images – sometimes upside down – question each other about the reality they represent. Together, they form the image of a city that, all of a sudden, seems to be simultaneously everywhere and nowhere, yet: here now.

The book is published in three different cover/belly band combinations.

NOWHERE is accompanied by a series of visual narratives, elaborating on the roles of the various creative partners in the project, ranging from spatial designer Tiago Rosado, composer Henry Vega to data visualiser Boyd Rotgans, starting off with computer scientist Gjorgji Strezoski: